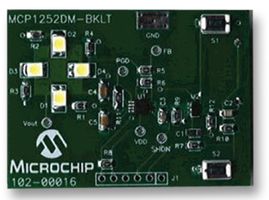 The MCP1252DM-BKLT is a MCP1252 charge pump backlight LED demo board demonstrates the use of a charge pump device in an LED application. The board also serves as a platform to evaluate the MCP1252 device in generally. The MCP1252-ADJ is an excellent choice for biasing the back lighting or driving other LED applications. The light intensity is controlled uniformly through the use of ballast resistors. The peak intensity is set by the feedback to the the MCP1252-ADJ. Dimming is accomplished by pulse width modulating the shutdown pin of the device. The board also feature a PIC10F206 microcontroller in a SOT23 package, which is used to provide an enable signal to the MCP1252. The PICmicro also accepts a push button input that allows the user to adjust the white LEDs to five different light intensities, in addition to placing the system in a standby mode that consumes less than 1µA of current (typical).

90 Day Warranty only. After Expiration of Warranty returns must be processed via Microchip.