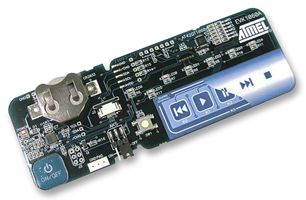 The EVK1060A is an evaluation and development kit for applications using the AT42QT1060-MMU ('QT1060') 6 channel QTouch integrated circuit (IC). The EVK1060A provides a convenient reference design and let designers visualize discrete touch buttons, the guard channel and LED control functions. The EVK1060A is configured with 6 capacitive keys (one as a 'Guard Channel'), 6 general purpose inputs/outputs (GPIO's) as outputs (LED 0 - 5) and the seventh GPIO as an input channel (SW1). The PCB section supporting the LED's can be snapped off to leave a small touch key array with minimum components on the board. The size of a credit card, the board works as a standalone, but can also be connected to a host or PC using the 9206 USB plug-in card. The included software can configure a number of device parameters and evaluate the operation of the device. The device comes fully assembled, tested and documented.