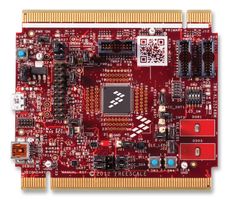 The TWR-KL25Z48M is a tower system module for MKL25Z128VLK4 Kinetis microcontroller. The MKL25Z128VLK4 is a Kinetis L series 32bit, ARM Cortex-M0+ core microcontroller with 128KB flash and 48MHz frequency. This microcontroller adds a full speed USB 2.0 on the go (OTG) controller with an integrated low voltage regulator. This tower system module is intended for use in the tower system but can operate standalone. An onboard debug circuit, openSDA provides a JTAG interface and a power supply input through a single USB mini AB connector, as well as a serial to USB, CDC class compliant UART interface. The TWR-KL25Z48M microcontroller module is designed to work either in standalone mode or as part of the tower system. It is a modular development platform that enables rapid prototyping and tool reuse through reconfigurable hardware.

Market demand for this product has caused an extension in leadtimes. Delivery dates may fluctuate. Product exempt from discounts.
X